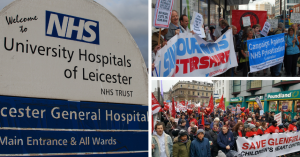 In the short time since we formed, the Save Our NHS Leicestershire campaign has made itself felt. We lobbied the Leicester, Leicestershire and Rutland Joint Health Overview Scrutiny Committee over local NHS plans to downgrade Leicester General Hospital by removing intensive care beds without any consultation of the public. This resulted in the committee formally recommending that the public should be consulted on such an important development. Leicester South MP and Shadow Health Secretary Jon Ashworth also backed our calls for a public consultation at a public meeting we hosted in September.

We have produced regular press releases and letters which have featured prominently in the local press, including the Mercury, as well more detailed reports on our website. And with the help of our many supporters, we have distributed tens of thousands of leaflets challenging University Hospitals of Leicester (UHL) NHS Trust’s plans to reorganise local hospital services – plans which, shockingly, will not create any additional beds even though local hospitals do not currently have the capacity to meet all local need.

None of this could have been done without our supporters and our affiliate organisations, which include individuals, a wide range of trade unions, community campaigns and political groups across the county.

Unfortunately, however, the local NHS Trust has not so far been willing to share the details of their plans with the public.

But from our success in overturning the decision to close the children’s heart unit at Glenfield Hospital, we know that people power can play a decisive role in determining the future of our services.

So come to our public meeting on Saturday April 6. The aim of the meeting is to shine further light on UHL’s £400million plans to reorganise local hospital services. It will also be an opportunity to find out what YOU can do to get involved. The meeting will be held at 2:30pm in the Hansom Hall, Leicester Adult Education College, 50-54 Belvoir Street, Leicester LE1 6QL. Please share and invite your friends to the Facebook event page: https://www.facebook.com/events/1029436130581510/

You can also become a member of our campaign for as little as £5 a year. Get in touch through the ‘Contact’ section of our website, or contact Tom on 07896 841 902, if you want to get involved. If £5 is, for any reason, not affordable please still get in touch. We don’t want to exclude anyone!

Nationally and locally, the NHS is being gradually pared down and, although care often remains very good, it is getting harder for patients to get appointments which results in delays in their treatment. There is currently a shortage of 40,000 nurses and 10,000 doctors. Our health service is at breaking point.

Whether you’re an individual or part of a group, we all rely on the NHS.

We need to fight together to save it.