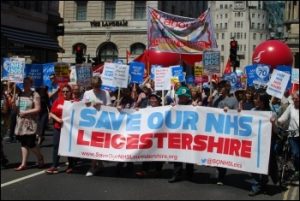 The following letter was sent to candidates standing in the May 2 Leicester, Leicestershire and Rutland council elections, as well as the mayoral candidates in Leicester City. The letter will remain open after the election and can be signed by elected councillors who share our concerns.

Save Our NHS Leicestershire is asking all local election candidates in Leicester and Leicestershire to add their name to a list of signatures to the following open letter. We will publicise the results before election day 2 May 2019. Please add your name to the list by emailing us back with your name, ward, and party. The letter is to the chairman of University Hospitals of Leicester

We have endeavoured to find contact details for as many council candidates as possible, but not all are publicly available – particularly those who are not already councillors. That said, if you could circulate this open letter within your respective organisations it will help to ensure that as many candidates as possible have the chance to read it.

If you are a candidate in the local elections and you have not received this letter but want to pledge your support, please email your name, ward, and party to secretary@saveournhsleicestershire.org.

The Save Our NHS Leicestershire steering committee

University Hospitals of Leicester (UHL) is planning to reorganise acute hospital services in Leicester, Leicestershire and Rutland via a project for which it is seeking capital investment from the Department of Health of around £370m. The plans involve closing the General Hospital as an acute hospital and consolidating acute services onto two sites – the Royal Infirmary and the Glenfield. A large amount of land especially at the General Hospital site will then be sold for other use.

Councillors have a key role to play in the NHS locally through the Health and Wellbeing Board and local scrutiny committees. As local election candidates we have concerns about these plans. 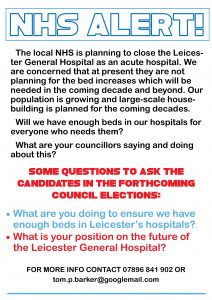