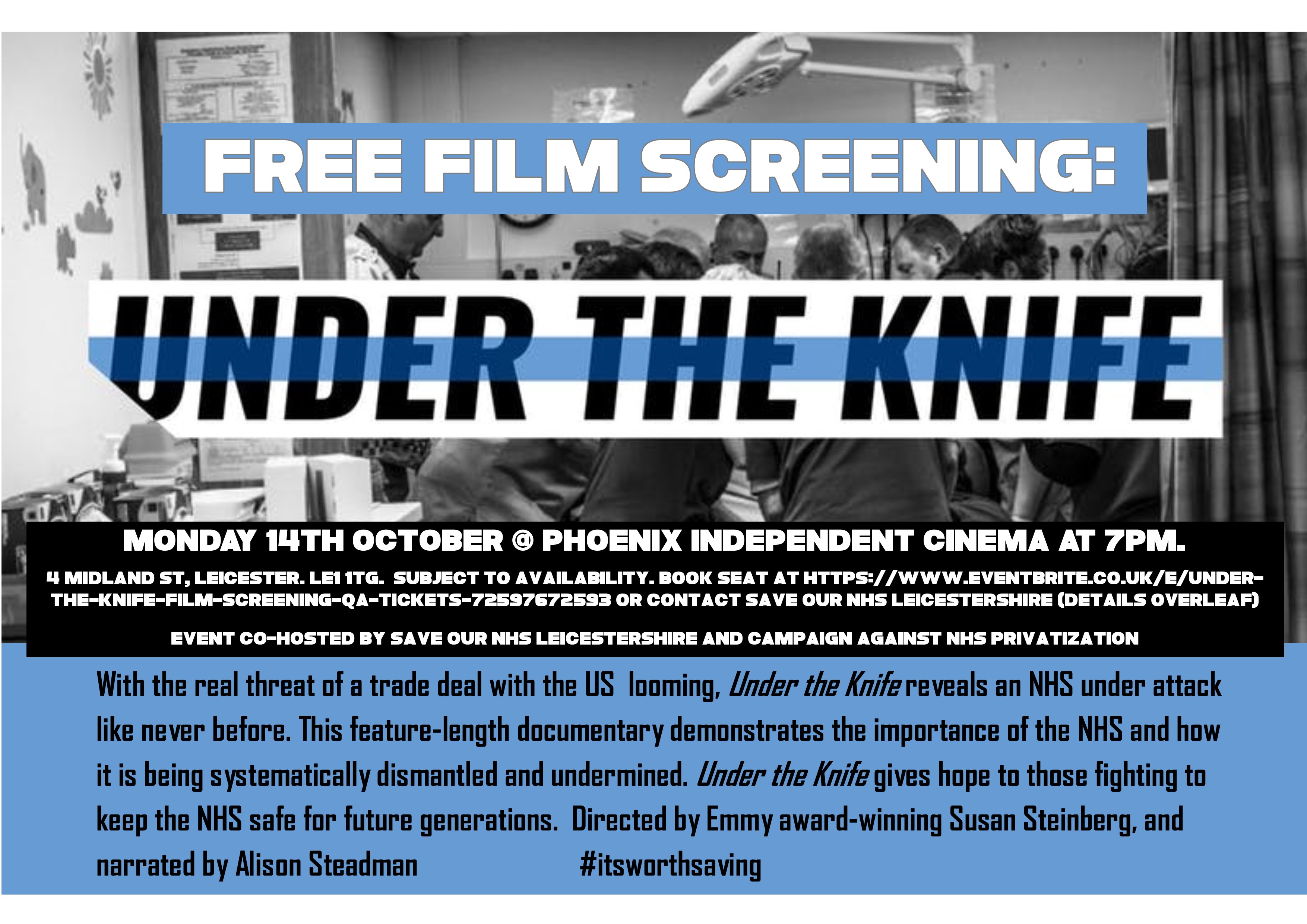 Save Our NHS Leicestershire, alongside Campaign Against NHS Privatization, is proud to co-host a free film screening of Under the Knife – a rousing documentary about the decimation of the NHS under succesive governments and the growing fightback – at the Phoenix Cinema on Monday October 14, at 7.15pm.

Narrated by award-winning actor, Alison Steadman, and endorsed by film director, Ken Loach, Under the Knife is a 90-minute documentary that tells the story of how the NHS arrived at its present-day crisis.

Under the Knife is to be screened in 50 venues – locations include London, Manchester, Birmingham, Newcastle, Liverpool, and Brighton. From its stormy birth, through seven decades of turmoil and political warfare, it has withstood almost everything that has confronted it – until now.

“Films, like words, can be weapons. This film is a weapon in our struggle to save the NHS. There should be details of the film in every hospital reception, every GP’s waiting room, every community centre,” said Bafta winning director, Ken Loach.

In Under the Knife, Emmy award-winning director Susan Steinberg and Pamela Kleinot uncover the covert, creeping privatisation of the NHS in the past three decades, culminating in the 2012 Health and Social Care Act, which opened the floodgates to private companies.

The film ends on hope, illustrating how communities, health care professionals and campaigners have successfully fought to defend hospitals and services threatened with closure through the courts, in council chambers and on the streets. In March this year, Keep Our NHS Public campaigners had a victory. They saved Ealing and Charing Cross hospitals after seven years of struggle. They have followed in the footsteps of the people of Leicester who beat NHS England, and the Tories who sit behind them, in saving the Children’s Heart Unit at the Glenfield Hospital in 2017. The battle rages on as hospitals and GP surgeries around the country close or are at serious risk, while private companies are creeping into the system, most disgracefully in mental health.

You can book your seat for the Leicester film screening here: https://www.eventbrite.co.uk/e/under-the-knife-film-screening-qa-tickets-72597672593 But please note: As it is free and there are limited seats, we are asking people to only book tickets if you really plan to come, or if you book and then subsequently realise that you cannot make it, then please let us know asap so your seat is not wasted.