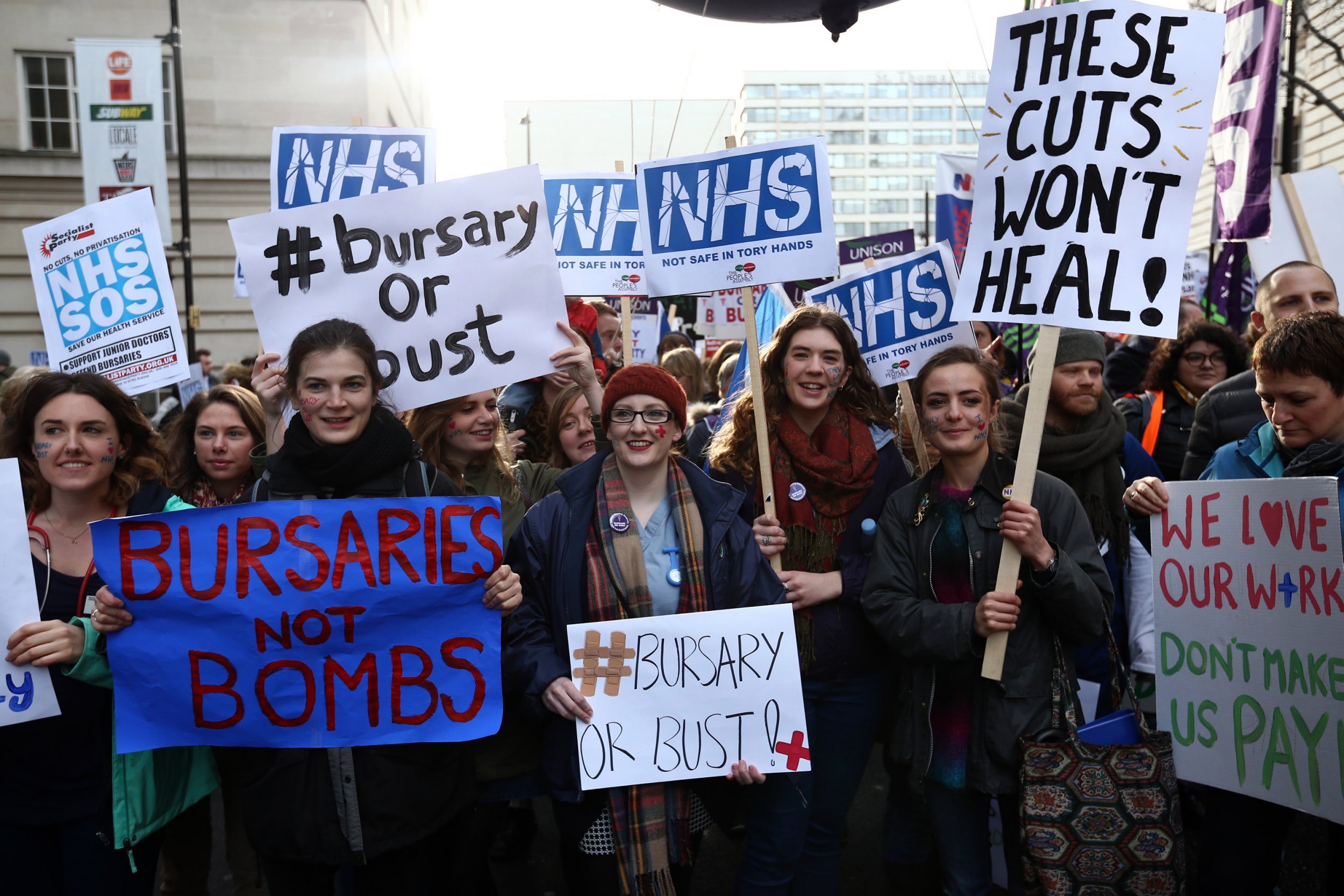 THE NHS IS IN CRISIS. Waiting times are out of control, cancer targets are frequently missed, patients face lengthy delays in seeing a GP, health care is increasingly being rationed, staff are overworked and underpaid, and carers are often unsupported.

The Tory government claims that the NHS is receiving record levels of funding. This may be technically true, but the rate of annual funding growth has been cut drastically compared with inflation and the needs of a growing & ageing population.

The NHS also faces continuous reorganisation leading to burnt out staff. This is exacerbated by shortages in resources. Consequently, we now have 100,000 staff vacancies in the NHS, including shortages in virtually all categories of staff, especially among nurses where there is a shortfall of more than 600 across Leicester, Leicestershire and Rutland (LLR).

The government’s response to this crisis is to push ahead with privatisation of large swathes of the NHS, sometimes behind the back of the public. They refuse to rule out closing community hospitals, such as the Feilding Palmer Hospital in Lutterworth and the Rutland Memorial Hospital in Oakham which serve patients from across the whole of LLR. Carers too are often unsupported and let down by the inadequacy of community services, which are in crisis because of years of austerity.

University Hospitals of Leicester (UHL) NHS Trust plan to reorganise acute hospital services in Leicester, Leicestershire and Rutland via a project for which it is seeking capital investment from the Department of Health of around £450m.

The plans involve closing the General Hospital as an acute hospital and consolidating acute services onto two sites – the Royal Infirmary and the Glenfield. A large amount of land at the General Hospital site will then be sold for other use. Virtually no detail about these plans is being put into the public domain and made available for public scrutiny. UHL’s detailed pre-consultation business case for reorganising acute services is being kept secret.

UHL’s new plans shockingly do not at present include an increase in the number of beds, despite ongoing bed shortages in local hospitals and the obvious need to expand capacity into the future. The local NHS believes an expansion in community services and different pathways of care will offset rising need for hospital care. But these services are in a similar, if not worse, crisis.

Once the Department of Health funding agrees in principle for a local hospital plan, there is a danger it will lock the people of LLR into an inadequate  facility for the next twenty years with no hope of large-scale government funding from future government during this period to address the shortage of hospital services. So it is important to get it right now. 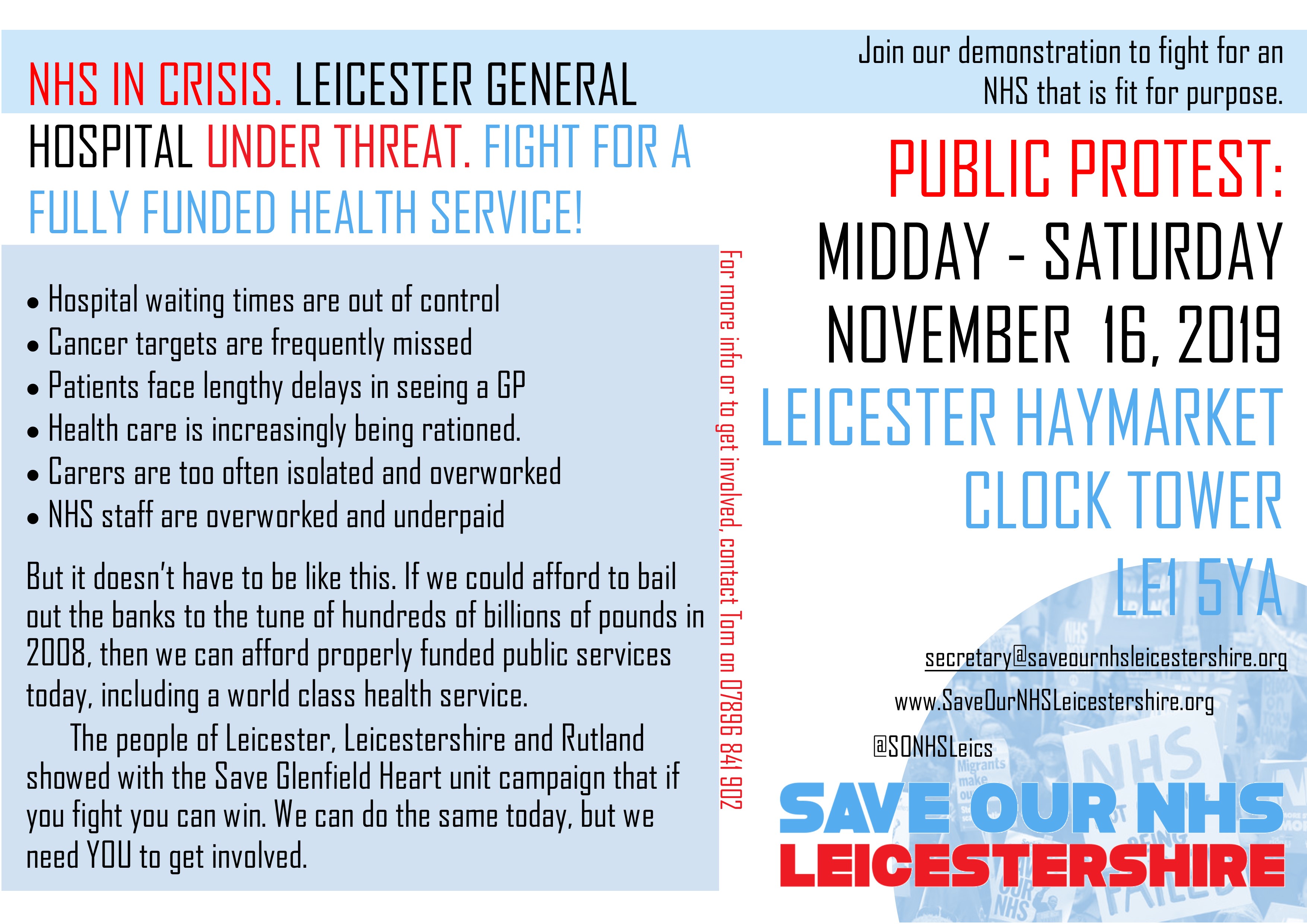 What you can do

Britain is the 5th richest country in the world. If we could afford to bail out the banks to the tune of hundreds of billions of pounds in 2008, then we can afford properly funded public services today, including a world class health service.

It is a matter of priorities as to who gets bailed out: the super-rich, or the many millions who are struggling to make ends meet and who depend on the NHS?

The people of Leicester showed with the Save Glenfield Heart unit campaign that if you fight you can win.