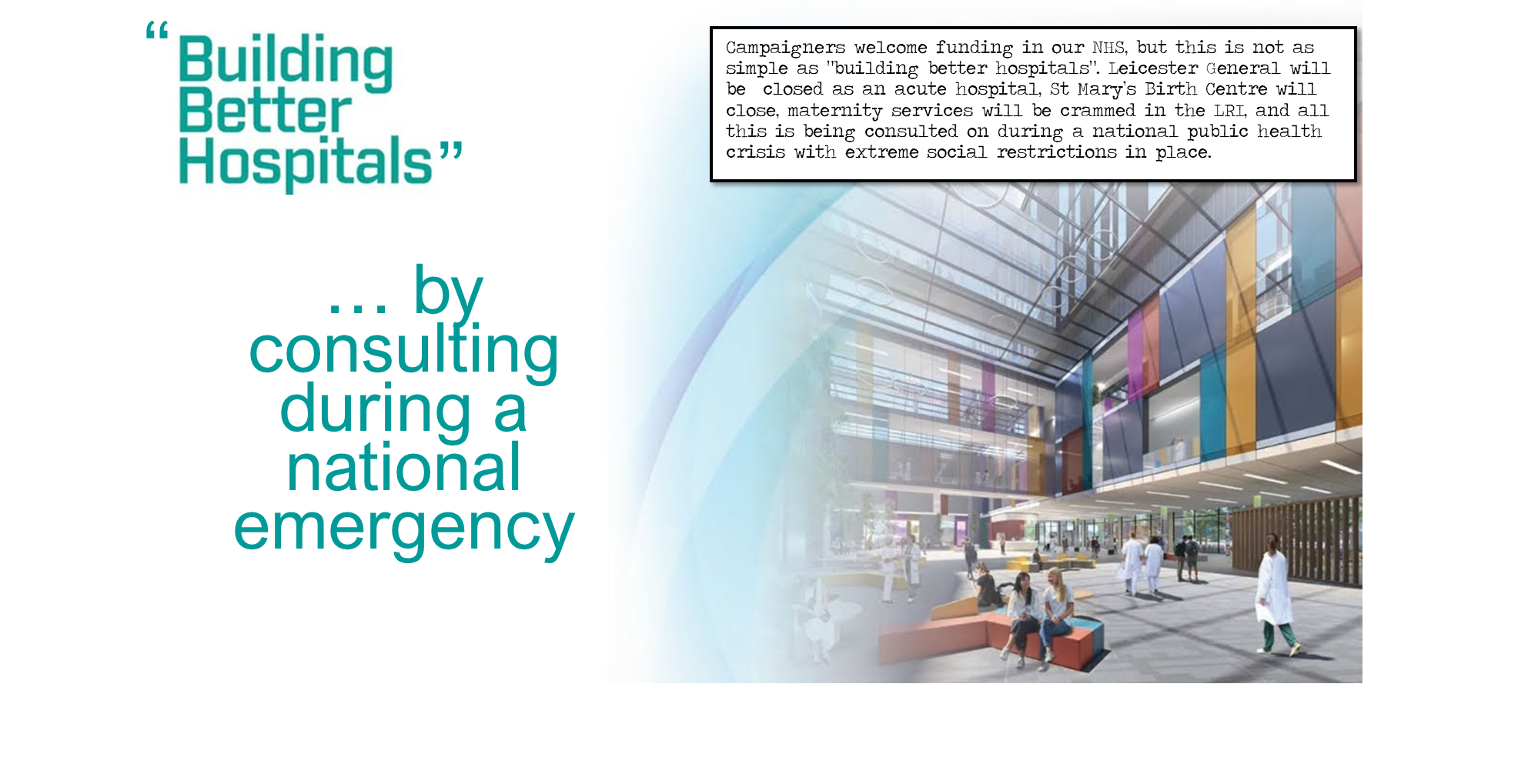 I have very serious concerns that now is NOT the right time to hold a crucial public consultation over the reconfiguration of Leicester hospitals.  Second national lockdown aside, we are in the midst of a worldwide pandemic.

Whilst welcoming the recent allocation of £450M to re-configure Leicester Hospitals, how on earth are the general public expected to engage with this.  I note that in a signed letter, by NHS Leicester officials and clinicians they stated that they want to encourage readers/ general public to take part in the consultation to share their hopes/aspirations for the NHS (Leicester Mercury 7th November – ‘Setting the Record Straight’).

Under normal circumstances engagements between NHS representatives and the public would take place in a public place where people could exchange their thoughts and concerns with each other as well as with officials.  This is not possible ‘on-line’, but due to the current pandemic it is the only option available to engage with the consultation.

The NHS Leicester public engagements/meetings online are hosted by Microsoft teams and are not easy to access.  (See letter in Leicester Mercury dated 14th Nov from a member of the public, who is computer literate but outlines all the problems he incurred and indeed missed the first 15 minutes of the meeting as it was so difficult to join).  Not everyone is I.T. literate.  Not everyone has access to the internet.  Many of those people will be the elderly, infirm, people with  mental health issues or learning difficulties and  those who are struggling financially.  Indeed, the most vulnerable in our society who need to be involved in this consultation.

A promise was made by UHL and Commissioners that every household in Leicester, Leicestershire and Rutland would receive a brochure notifying them of the consultation and how to engage.  There appears to have been some problems with this.  Andy Williams – CEO of 3 Clinical Commissioning Groups agreed to look into this problem promptly at a Joint Overview Health Scrutiny Committee meeting held on 15th October and here we are almost 1 calendar month on and over halfway through the Public Consultation and it appears from the responses of online meetings and via social media that thousands of residents have still not received it.

So, the NHS officials stated that they wish to encourage the public to get involved with this public consultation, but I have to ask, given the above, how can this be a meaningful consultation as it is quite clear that their attempts at inclusion, are at best questionable.  Public debate/interaction is almost stifled.