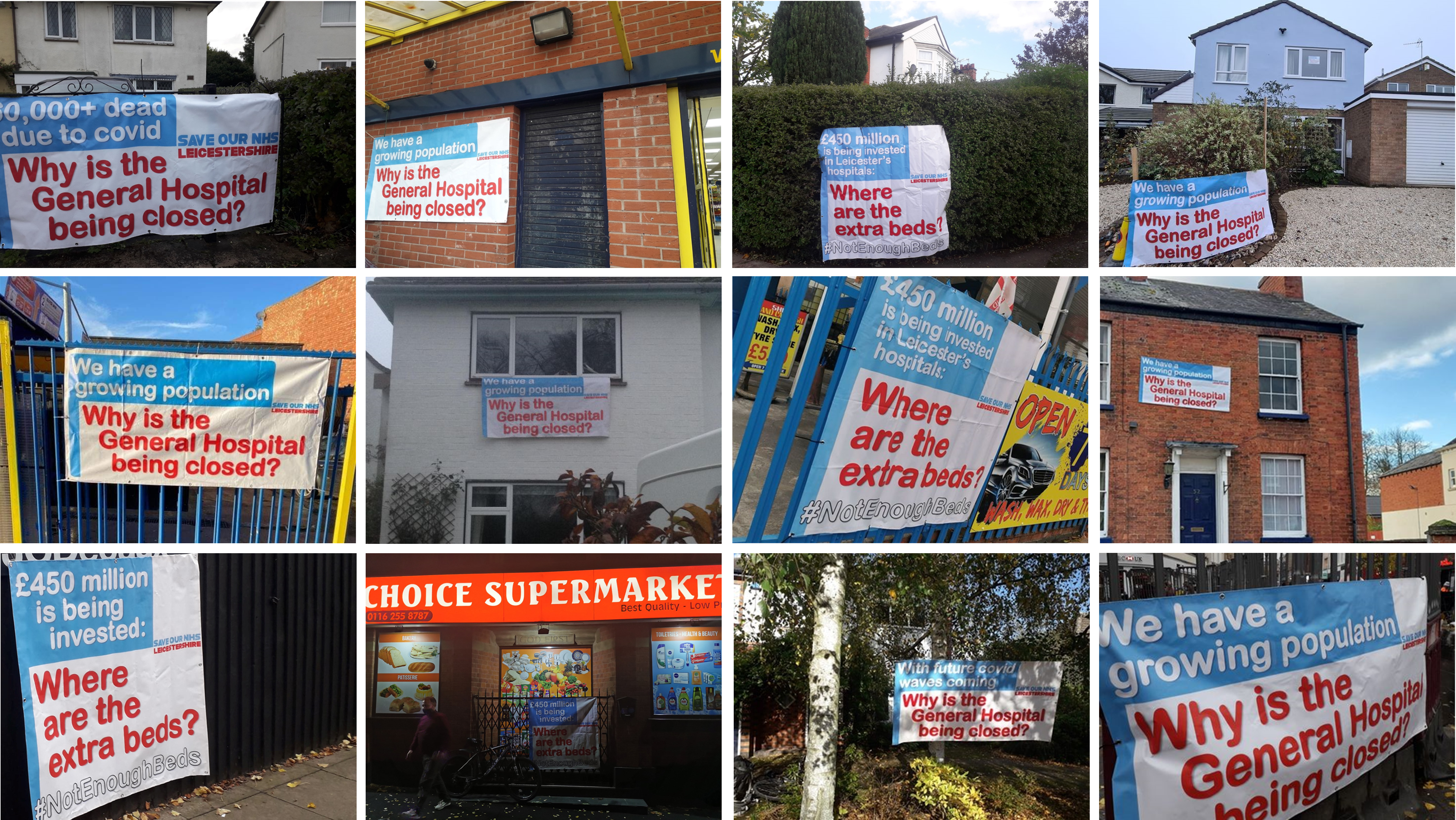 With the £450million hospital reorganisation consultation drawing to a close on Monday December 21st, many people in Leicester, Leicestershire and Rutland are still none the wiser about the plans. Part of the reason for this is because the local Clinical Commissioning Group saw fit to run a public consultation in the midst of an extreme public health crisis with severe restrictions on social activity in place.

But even for those who have read the plans, many will still not be aware of its full implications. It is not explained, for instance, that the proposals aim to shrink the local NHS estate considerably, with the General Hospital being closed as an acute hospital and the majority of land sold for other use, and that this shrinkage is actually a precondition for receiving the money. It’s not mentioned that the government is effectively blackmailing our NHS, starving it of funding unless it agrees to sell off large portions of publicly owned land.

It’s also not explained that the proposals to provide fewer services in hospitals and more in the community is based on the acceptance of an ever-shrinking pot of money, potentially locking us into poorer services for the foreseeable future. It is not explained that community care is in a deep crisis right now after years of austerity cuts, but that the plans to reorganise our hospitals are, paradoxically, completely dependent on a huge improvement of community services.

But the lack of genuine public engagement by NHS bosses goes deeper than just misleading information and lack of access. It also has to do with changes in social relations due to lockdown.

Normally consultations would involve meeting publicly, providing an opportunity for the public to question NHS bosses and discuss with each other about proposed changes, including with those who may disagree strongly with the narrative being sold by the NHS, whereas in the case of the current consultation meetings have shifted entirely online where interaction between attendees is almost impossible, except for times when chat boxes were permitted. As we know from recent and ongoing experience, for many people online is, at best, a pale substitute for the real world. For the inexperienced it can be alienating. There are serious questions to be asked about the number of people who may have been digitally excluded as a result of this.

NHS bosses claim that their webpage advertising the plans has had thousands of visits from people living in LLR but we question whether this is an indicator of genuine engagement with the plans.

One way that the NHS could have reached out to a wider section of people in the region is through the post. And indeed, originally NHS bosses planned to send a consultation questionnaire to every home in LLR. Unfortunately, however, this document was never received by an apparently huge number of people. An attempt to rectify this through another delivery worked just as badly. The local NHS has subsequently attempted to play down the importance of this element of engaging the public, but we ask why, if it was so unimportant, was it so central to their original plans and why did they spend so much money in sending questionnaires, twice, to more than 400,000 homes? Logically as well, sending questionnaires to every home in the region seems like a very good way of mitigating digital exclusion. With just days left of the consultation, and many areas still not receiving the document, it is clear that the NHS has given up on this strategy. Whenever we have asked people in a meeting or on Facebook if they had received the leaflet, the vast majority said ‘no’.

As supporters of Save Our NHS Leicestershire, we do not have access to the vast budgets available to NHS bosses in reaching the public (hundreds of thousands have been spent on the consultation). We have also been hamstrung by our inability to call large public protests. Yet we have found ways to reach out, using social media, but also with leaflet drops of which we have delivered tens of thousands, along with window posters and two-metre-long banners which have been erected around Leicester, Leicestershire and Rutland. We have held online public meetings aimed at challenging the narrative being put forward by local NHS bosses and seeking improvements on the plans, with our most recent attracting close to 70 people. We also initiated a letter-writing campaign in the local newspaper, which has seen dozens of people write in to voice their concerns.

We have produced a guide to the NHS’s consultation confusing and misleading questionnaire, which we urge you to fill in. You can access our guide here: http://saveournhsleicestershire.org/2020/11/24/leicester-general-and-st-marys-birth-centre-under-threat-heres-our-guide-to-filling-in-the-consultation-questionnaire/ and the consultation questionnaire here: https://nhs.researchfeedback.net/s.asp?k=160035362231.

All this has had a considerable impact on the debate. On Wednesday this week, Leicester City Health Overview Scrutiny Commission recommended that the site at the General not be sold, and that the proposed trial for a midwife-led unit at the General not have its fate decided after a trial of only 12 months, which had been the intention of the Trust. Although not legally binding, these recommendations set down an important marker about the inadequacies in the Trust’s planning. But we need to keep pushing.

The consultation may end on Monday, but this is far from the final word on the subject. Read our guide here: http://saveournhsleicestershire.org/2020/11/24/leicester-general-and-st-marys-birth-centre-under-threat-heres-our-guide-to-filling-in-the-consultation-questionnaire/