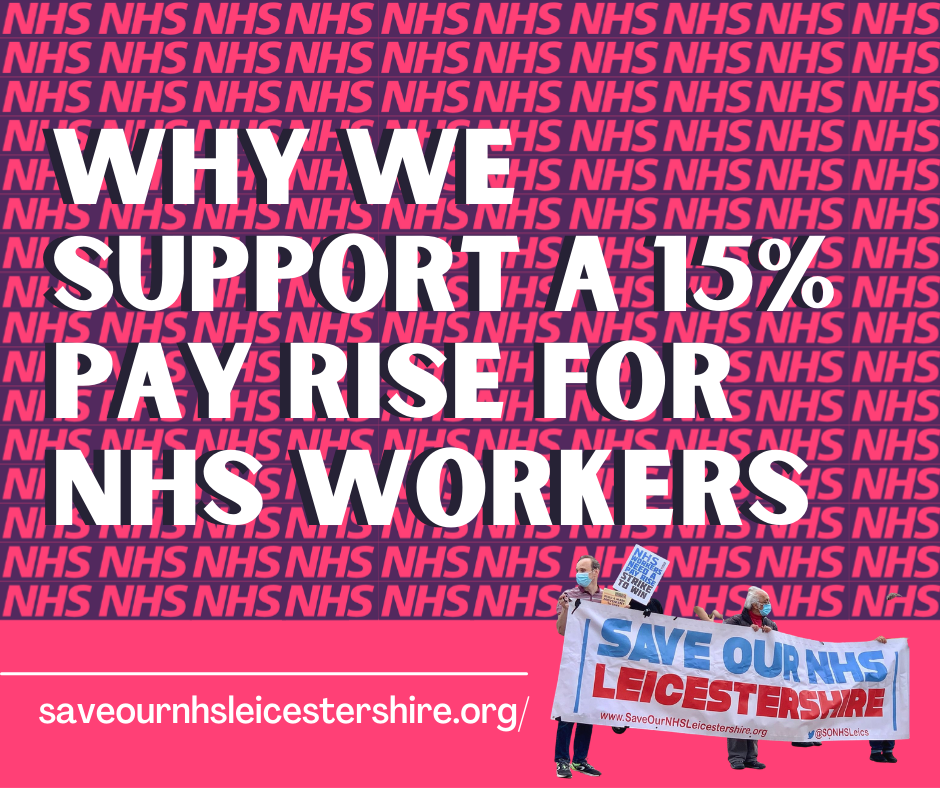 Campaigners at Save Our NHS Leicestershire send their solidarity to all NHS workers who have sacrificed so much during this pandemic, only to be offered a derisory 1% pay increase from the government.

We think that the government has treated you disgracefully and we would back you fully should you take industrial action. Of course, no one wants to go on strike, not least in the health sector, but for too long the government has used this as a weapon against health workers. This has to stop now, and we are committed to do everything we can to ensure the public backs you as well.

NHS workers have faced a real-terms pay cut of around 20% since 2010, but they have also faced trauma due to be overwhelmed during annual winter crises, the loss of the student nurse bursary, and huge overwork – there are currently more than 100,000 vacancies in the NHS!

On March 30 last year, Rishi Sunak, while clapping for carers from the doorstep of Number 11, said to NHS workers: “Whatever you need, that’s what you’re going to get.”

What has this meant in real terms? The government failed to provide NHS workers with adequate PPE during the first wave, even attempting to blame health workers for misusing it; they failed to put in place a working test and trace programme, despite paying more than £37 billion (equal to 1/3 of the entire operating budget for the whole NHS) to the privately run test and trace system; and they have failed in their duty to safeguard NHS workers, more than 800 of whom have died of Covid. Now they kick NHS workers in the teeth with a 1% pay offer.

There are rumours that another U-turn from the government may be on the way and that the government is looking at a one-off payment. But we should be clear. A 15% pay rise is only a step toward correcting the pay cut faced by NHS workers over the last 10 years, to say nothing of repaying the debt of gratitude we have for all their sacrifices these past 12 months.

And the money is there. The billions this government has wasted on private contracts during this pandemic could have paid for a 15% pay-rise for NHS workers many times over.