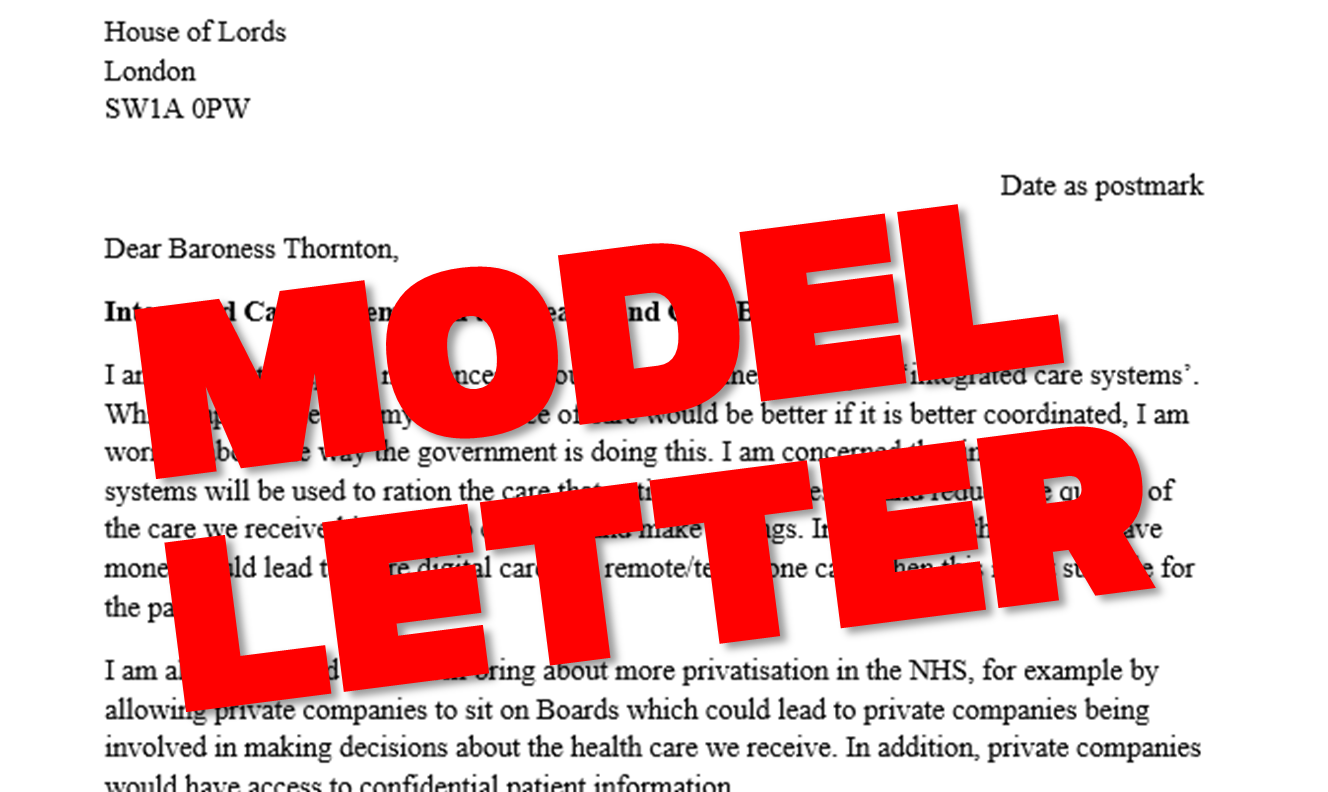 A PDF of the letter can be found here: LetterThorntonICS-Dec21

In November this year, the Conservative’s controversial Health and Care Bill passed its final reading in the House of Commons. Amongst other things, the Bill divides the NHS in England into 42 different ‘systems’, each with its own tight budget with the principal aim of driving down the costs of health care. And while the Bill is promoted as reducing privatisation in the NHS, the reality is the opposite. Private companies are even being allowed to sit on the integrated care system boards in each area – thus partially running the NHS. This Bill is designed to deepen the role of the private sector in our NHS!

With the passage of the Bill through the commons, parliamentary opposition to the Bill will now have to be built in the Lords. With this in mind, Save Our NHS Leicestershire has drafted a model letter to Baroness Thornton asking her and ‘other members of the Shadow Health Team to speak out very publicly about the dangers of the Health and Care Bill’.

We encourage those concerned about the Bill to print out, sign and send a copy of this letter yourselves – you can even use it as a model to write your own! A PDF of the letter can be found here: LetterThorntonICS-Dec21

Read more about the Health and Care Bill and why it must be fought: http://saveournhsleicestershire.org/2021/07/09/conservative-health-and-care-bill-deepening-the-role-of-the-private-sector/

There are some really useful resources on this subject here: https://keepournhspublic.com/campaigns/scrap-the-health-and-care-bill/

Look out for dates in the new year where we will be organising actions against the Bill.

Full text of the letter:

Integrated Care Systems and the Health and Care Bill

I am writing to express my concern about the government policy of ‘integrated care systems’. While I appreciate that my experience of care would be better if it is better coordinated, I am worried about the way the government is doing this. I am concerned that integrated care systems will be used to ration the care that patients have access to and reduce the quality of the care we received in order to cut costs and make savings. In particular, the drive to save money could lead to more digital care and remote/telephone care when this is not suitable for the patient.

I am also concerned that it will bring about more privatisation in the NHS, for example by allowing private companies to sit on Boards which could lead to private companies being involved in making decisions about the health care we receive. In addition, private companies would have access to confidential patient information.

I would like to ask you and other members of the Shadow Health Team to speak out very publicly about the dangers of the Health and Care Bill as I am worried that many people are not aware of it. Given the numbers of each Party in the House of Commons, it is likely that this Bill can be defeated only by raising the awareness of the public of its dangers and by encouraging the public to express their anger with and opposition to the Bill.