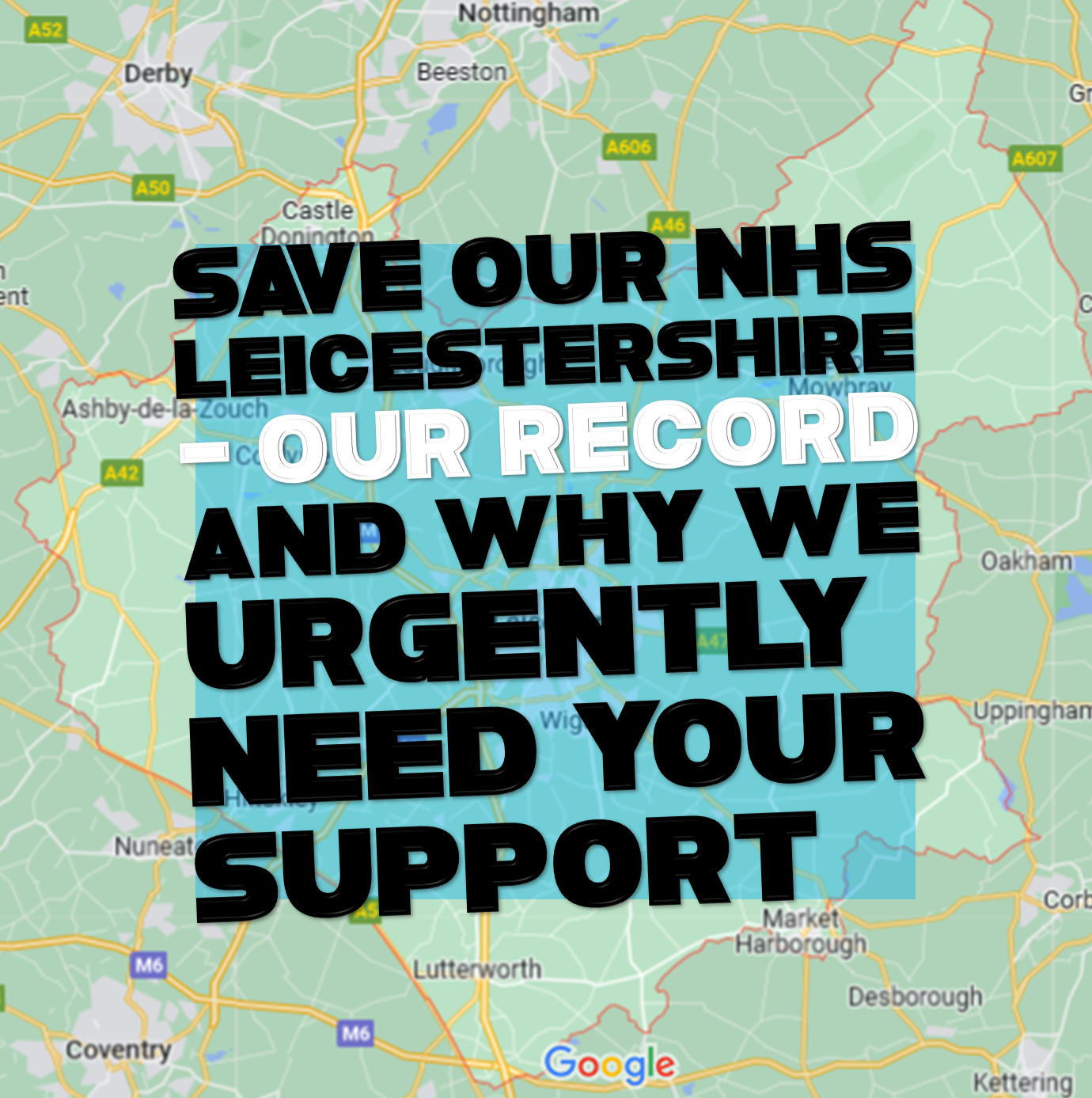 It’s now almost four years since our campaign was established, growing out of a successful campaign in 2016-17 to save the children’s heart unit, then at the Glenfield Hospital and now at the Royal Infirmary. We have had some significant achievements during this time (to read about our earlier record, check out this report from March last year), and it is important to note that there have been important victories for the wider health movement over the last period. But it hardly needs to be pointed out that the general situation faced by our NHS has in significant ways worsened.

Our health service has been under continuous attack by this government. They have underfunded the NHS while seeking to expand the role of the private sector; they have held down pay for NHS staff; and they have required reorganisation plans, like the one here in Leicester, Leicestershire and Rutland, which result in a reduction in hospital capacity relative to need and the sale of large portions of NHS estate. All this while the pandemic has underlined the central importance of public ownership, the need to treat staff with respect dignity and to pay them accordingly, as well as the need for significantly expanded services, including retaining NHS estate!

But we haven’t succumbed to despair as a result of these things. We have attempted to fight back!

We have (among other things):

Our members and supporters have been involved in lots of different local activities, including a campaign to defend GP services at Park Drive Surgery in Braunstone Town; a campaign to defend Rutland Memorial Hospital, which has received significant coverage in the Rutland Times; and the ongoing fight to maintain beds at Feilding Palmer Hospital in Lutterworth, to name just a few.

We do not focus solely on local concerns. We want a NATIONAL Health Service that is fit for purpose. That’s why we have fought tirelessly against the 2021 Health and Care Bill which gave legal underpinning to new Integrated Care systems. We are not opposed to more joined up and coordinated care but we do have concerns about aspects of the new Act. For example, we have opposed at every instance the possibility of membership on the Integrated Care Board of individuals from the independent health sector. We have called repeatedly for a greater say by the pubic in decisions which are being made. We participated in a national day of action on June 11 2022 called by We Own It & Unite Community to oppose the rollout of the ‘Integrated Care Systems’. We have also organised many street activities, such as stalls and banner drops, engaging the public around this subject. We have written and reproduced numerous reports on the dangers of the Tories’ Health and Care Bill, both for patients and staff.

NHS pay has been another central concern over the last year. Our call for an immediate 15% pay rise for all NHS workers was published in the Leicester Mercury and on July 3, 2021, we organised a protest on this issue in Leicester City Centre, as part of the NHS’s 73rd anniversary. Around 100 people turned out for our very lively demonstration; a video of an intensive care nurse speaking at this protest was subsequently viewed online by more than 30,000 people.

On February 26 2022, we held two simultaneous protests in Leicester and Market Harborough as part of a National Day of Action organised by SOS-NHS calling for an immediate injection of £20 billion onto the NHS budget. The Leicester turnout was so good, the planned static rally ended up involving an impromptu march around the city centre!

Our reports have been picked up by a big variety of media outlets, including the Leicester Mercury, the Harborough Mail, the Rutland Times, BBC East Midlands, ITV Central, and more. But it is not easy getting coverage and we have had to fight to gain attention. We have challenged local NHS leaders using petitions, open letters, media interventions, articles, protests and lobbies – we have done everything in our power to drag their backroom dealing into the public, and with some success.

We have done all this and more by engaging the public and existing organisations, seeking to collaborate with other campaigners and to activate those not already involved. If you are not already involved, we ask you to consider what contribution you could make to help us campaign.

Just as important as this, however, is the support we already have. Whether its individuals, trade unions, community or political groups, without these links our campaigning would be next to impossible and if you or your organisation are amongst our supporters, we thank you for the solidarity you have shown.

We know from our own experience that if we fight, we can win. Our campaign grew out of the campaign to Save Glenfield Children’s heart centre. A mass campaign saved the unit!

On a national scale ongoing campaigning and pressure from below can win victories!

If you support us and what we are fighting for, we ask that you contribute in whatever way you can toward our finances. For individuals, you can join as a supporter for as little as £5 a year (we can discuss exemptions if this is prohibitive), but we would gratefully receive more.

For large political groups and trade unions, we recommend that you pay an affiliation fee of £50 (again there is no upper limit). However, we recognise that each group’s financial situation is very different. We are therefore suggesting a £20 fee for smaller organisations.

Payments should be transferred to: SAVE OUR NHS LEICESTERSHIRE. Santander. Account no 28707444; sort code 090129. When sending payments, please clearly label where the payment is coming from and send an email to secretary@saveournhsleicestershire.org to notify us.

Alternatively, cheques can be made out to Save Our NHS Leicestershire and sent to our campaign treasurer Shirley Barnes at 33 Petworth Drive, LE3 9RF.

Thanks for your support.